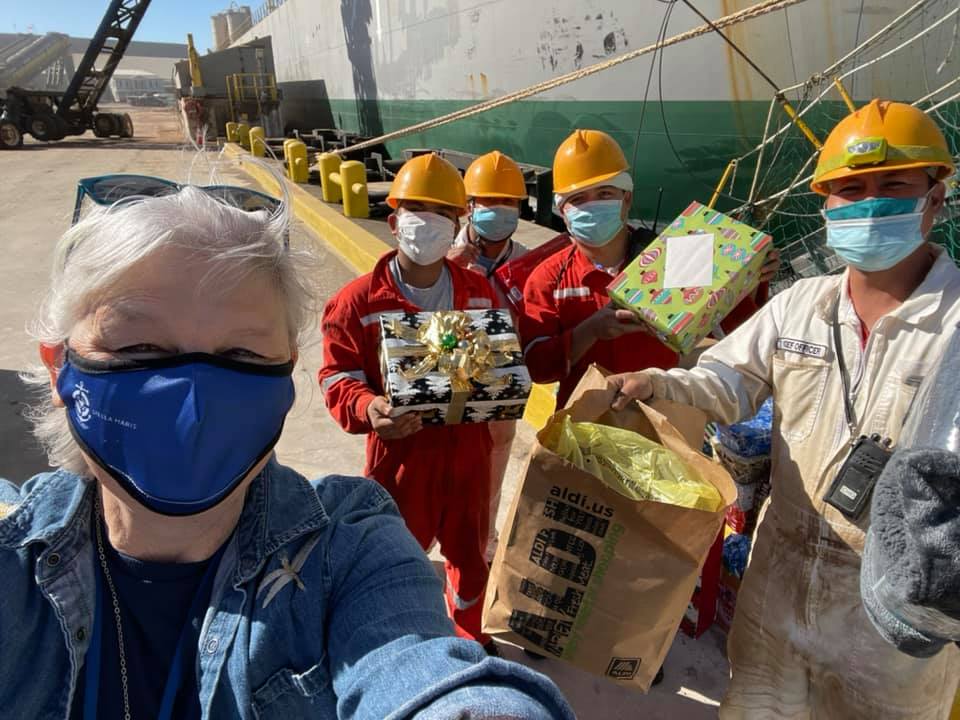 Karen Parsons retired on Dec. 31, 2020, after a long career in maritime ministry.

She was a young mother of three small children when she attended Mass in Detroit, Michigan, on a day which changed her life.

“I took the bulletin home to read later,” said Parsons. “In it was an article that went out to all the parishes of the Archdiocese of Detroit asking for volunteers for the Apostleship of the Sea mission in the Port. It was just a tiny thing. It could have been easily missed.”

Parsons wanted to serve. She had been praying for God to lead her to where he needed her. There was not much room for women to serve in the Roman Catholic Church, she recalls.

The request for volunteers intrigued her. Parsons attended a meeting with 35 others lead by Reverend Rick Hartmann, chaplain in the Port of Detroit. He offered laypeople the opportunity to volunteer in the port ministry. Parsons was all in. She attended six weeks of training, culminating with a trip to the docks for some practical experience.

“I was terrified of heights and water,” she said. “When we were directed to walk the steep gangway to board the ship, I turned around, but the chaplain didn’t allow that and walked me back to the gangway. I started praying and walking up the steps. Once onboard, I met my first Filipino seafarer.

I was hooked,” said Parsons.

Still busy with a young family she continued to volunteer in the Detroit port for two years. In time, the priest in charge wanted to hand off the leadership of the ministry confidently so he selected Parsons, his devoted volunteer to join him as an assistant chaplain.

Parsons was on a new track. She completed the Chaplaincy Training in Port Ministry program and became certified in Port Ministry and Seafarers Rights through the Seamen’s Church Institute. She served the center on the Great Lakes for more than seven years when her service was noticed by Fr Rivers Patout, a well-recognized leader in the ministry to seafarers.

Patout brought Parsons to the Galveston Seafarers’ Center located along the southern coast of Texas. Parsons says he offered her the leadership of the center: It’s yours if you want it.

A move would be a major adjustment for the entire family. Parsons was close to her family in Michigan where the ministry was seasonal. Galveston was year-round. Her three kids were then ages 8, 10, and 12. When she accepted, everything changed.

“It was a rough time. School was difficult for our kids. The words used were different. The culture was not the same. Birthdays and holiday celebrations previously shared with family were no longer the same,” said Parsons. “We had to adjust to that.”

“We invited seafarers to our house. They became our family,” the chaplain said. “As we would write home and tell our stories to our extended family, they became more aware of our ministry and became more involved in it.”

However, the greatest challenge Parsons faced in Galveston was a gender issue.

“I constantly had to prove myself as a female. Everyone was male and the board was unprepared for a female chaplain. I was a lay person with children, and Catholic. They didn’t want to deal with a woman with a family.  I had to prove that I wasn’t just some schmuck coming off the street,” she said. “I made sure that no one would say I wasn’t professional.”

She dug in and worked hard. Parsons became a valuable member of the Galveston Ministerial Alliance for 29 years. As a chaplain, she attended seminars, conferences and training opportunities until she began to train others. By 1990 she was teaching at the Houston Maritime Ministry Training School. Parsons conducted seminars on ministry among seafarers in South Africa, Australia, Brazil and the Philippines.

Parsons earned a Master’s Level Certification in Spiritual Direction from the training institute in Houston and was the first Catholic layperson to be appointed as a chaplain. Furthermore, she is one of the first two women appointed by the Vatican to serve as regional coordinator for the Apostleship of the Sea (now known as Stella Maris), overseeing chaplains in North America and the Caribbean.

Throughout this time, her commitment to her family and the personal care of seafarers did not wane.

She humbly notes that when she boarded ships she had a keen sense of which person on board needed her the most.

“The Holy Spirit led me to the loneliest or the person with the greatest need and showed me how I could be present to them while they were in our port,” she said. “I spent time writing letters of encouragement. Before their ship would leave I gave them letters, predated for each day while at sea until they reached their next port.”

Parsons has over 20,000 letters from seafarers in her files, not to mention those in archives. Among her other duties she developed a correspondence ministry for 35 years with letters and stamps and electronic means. Many began to treat to her as a mother or a sister.

Parsons was honored at the 2020 North American Maritime Ministry Association Annual General Meeting in June with a Distinguished Service Award for 35 years in seafaring ministry and for giving significant support to seafarers and the NAMMA network.

When asked for any wisdom she could share with those in or entering chaplaincy among seafarers she responded.

“This ministry is not about us. It’s all about what God can do through us and through the seafarers. We are greeting Christ in the seafarers.

“I find it most gratifying that in some way, even if I smiled under my mask, and they only saw my eyes, if that is the only thing that made them feel visible and loved it was worth it,” said the newly retired chaplain. “It has been an absolute joy to be part of their lives.”

Her next big step is to sell her home and return to Michigan and her family.

God bless her journey from here on.

Image: Karen Parsons ship visiting in her last week of work, Dec. 29, 2020. Photo caption: “My last ship today was WONDERFUL WORLD! Perfect! Yes, it is! Thank you seafarers for making this a wonderful world!” Facebook. 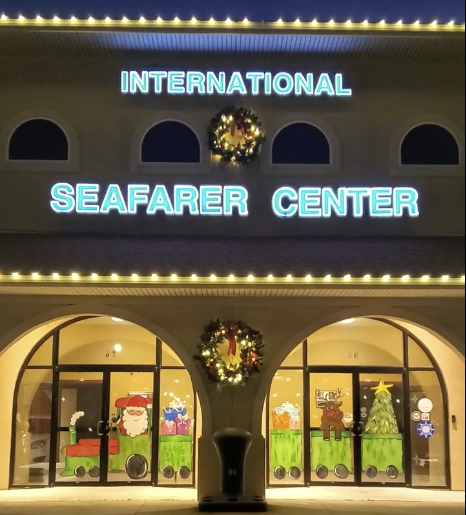 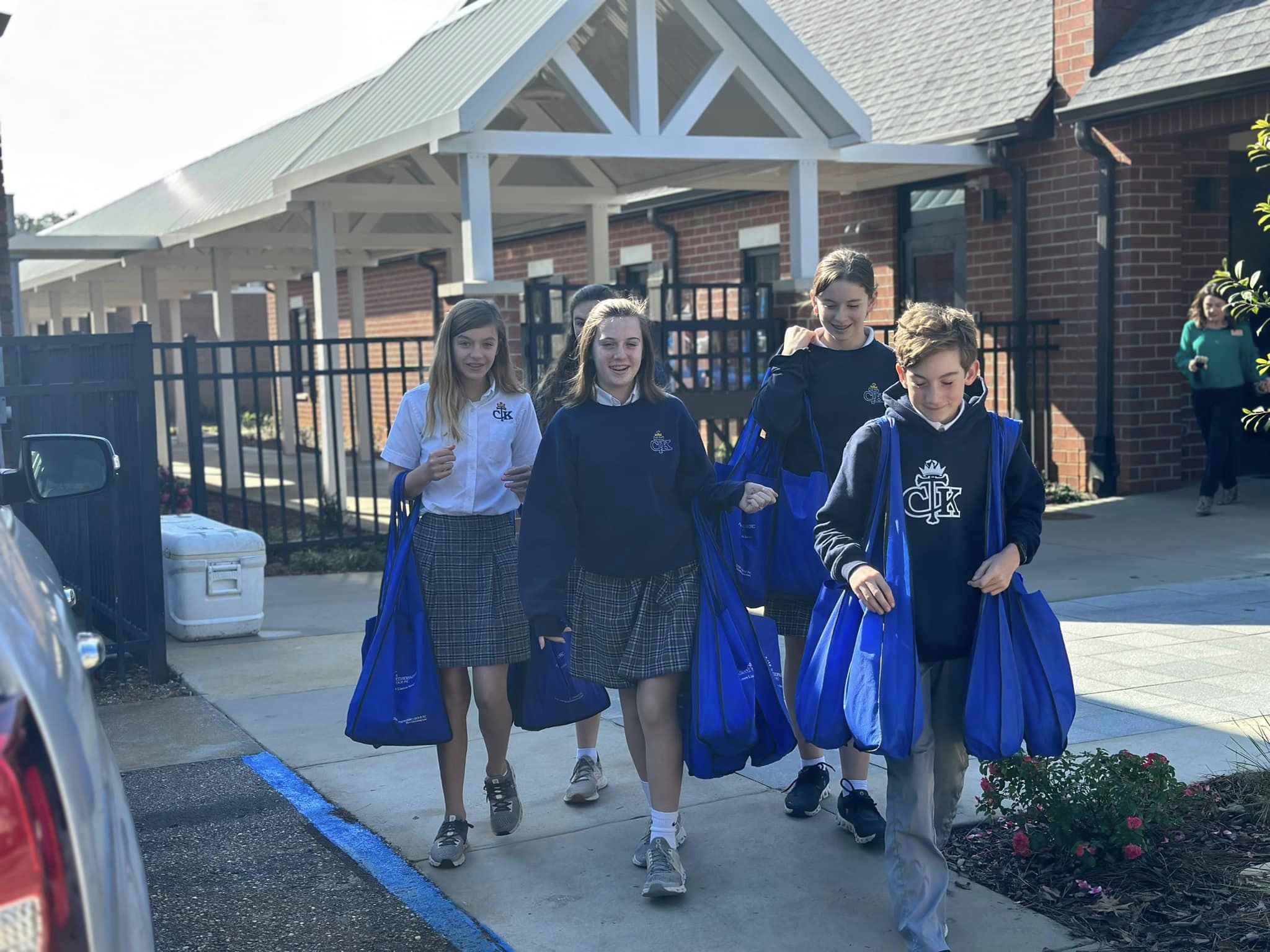