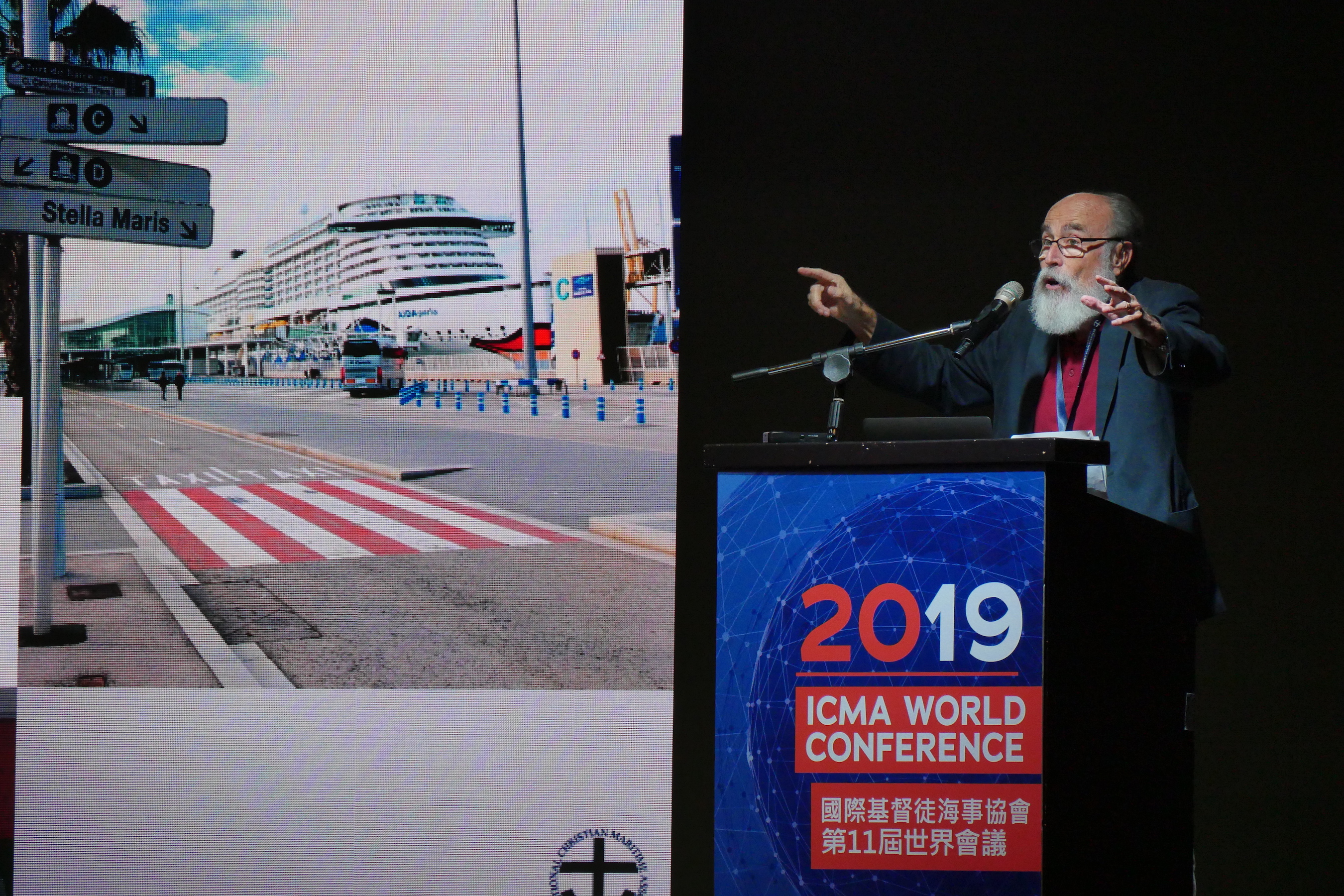 One highlight of October 22, the second day of the ICMA 2019 World Conference in Kaohsiung, was a lively panel entitled “A Unified Voice for our Work Together.”  Deacon Ricardo Rodriguez-Martos’ presentation on the port community, Douglas Stevenson’s on ICMA’s involvement in the MLC 2006, and Andy Bowerman’s on ship abandonment in the Middle East were all inspiring, although the show was somewhat stolen by Mary Leahy, who introduced each panelist with a joke and an amusing glimpse into their private lives.

Sister Leahy and Deacon Rodriguez-Martos, both veterans of maritime ministry and collaboration with the port community, sat down after the panel with Kevin Walker to expand on this theme.  Here are some excerpts from the interview.

Kevin: For those of us who are meeting you for the first time, could you tell a bit about how you got involved in maritime ministry?

Ricardo: Well, I’m a former captain, and when I decided to stay ashore I studied theology and was ordained as a deacon.  Then, because I was a former seafarer, my archbishop told me that I would be dedicated to the Apostleship of the Sea. This happened 36 years ago. As the port chaplain in Barcelona and a member of the AOS, I automatically became a member of ICMA, and I have been coming to these conferences and working with ICMA in different functions all this time.

Mary: I’m a former nurse, and a missionary in Australia from Ireland.  I was happily nursing when I heard they were looking for a port chaplain in Sydney, but the sisters I lived with said “Oh, that’s a job for you, Mary” – I had never even thought about it!  So, I applied, and I got the job. I realized later that nobody else applied for it, so that must be how I got it.

That was 26 years ago, and at that point the Stella Maris club in Sydney had finished.  It had always been a priest who was in Sydney, and Fr. Jim, my predecessor, told me “make of it what you can, because it’s changing times.” He had a bit of a vision for that: he knew that the days of a club had finished for Sydney, so there had to be a new way.  So I was just visiting ships and trying to find my way, and through that I gradually learned that we were part of this larger group, ICMA.

Kevin: Ricardo, in your presentation today you talked about “indirect action,” that is, making a difference in the port community by making yourself available to it.  Could you explain more how that works?

Ricardo: Preparing activities for seafarers and visiting ships, are of course the most important things you can do, but you also need support from the port and for the people in the port to know about seafarers’ needs.  The only way to achieve this is to spend time on relationships inside the port: visiting ship agents, going to meetings with the port authority, meeting the harbour master, etc. Whenever there is any kind of event at the port, you should be there.  Also being part of all the working groups in the port. The most important thing is the port welfare committee, but without the complicity of the port authority this will not be possible.

Good relations with the port community are a spiral.  When you start to be in touch with the people, they call you afterwards.  For example, we’re on the Port of Barcelona’s sustainability working group.  The port invited us to be part of this group – we didn’t ask the port, the port asked us.  Any time there is any kind of problem, the port comes to us. They need us and we need them, and this is the best way to achieve better services to seafarers.

Mary:  Absolutely.  Sometimes we can have a “silo mentality,” going into the ship and ignoring everybody around the ship, and it just doesn’t work.

I find it good to spend time with the vessel tracking people, the first to talk to a ship when it comes into Australian waters.  For instance, because of our connection, I can tell them “Hey, the captain of this vessel’s first language is not English, so he might be a bit worried.”  The relationship starts there, and if the captain feels welcomed to a Sydney port, that will have a ripple effect to the crew and the officers.

Then there are the pilots.  When the port gets a new pilot, I like to go out with them on the boat to witness the pilot’s job, and again, the pilot can come on board ships and do wonderful things.  And then when the ship comes in there are the tugboats, and then to tie it up there are the wharfies. I think what it requires of us is that we let go – we don’t have to do everything, we can facilitate others in doing all the good things we do.  This is very satisfying, and it absolutely has a direct effect on the seafarers, which is what we really want.

Kevin: Another theme in Ricardo’s presentation was the many different attitudes that prevent ministries and port communities from building relationships – you mentioned trying to do everything on your own, like Mary said; saying there is nothing more to be done; and dismissing seafarers’ welfare as a kind of non-committal philanthropy, for instance.  What do ministries need to say to show their friends in the port the importance of seafarers’ welfare?

Ricardo: Well, this is something you need to do more or less every day.  We can’t say to ourselves, “Once I have explained this, everybody knows it.”  Still in Barcelona, where they support our work, I am convinced there are people who think that what we do is anecdotal, that it is giving alms.  That mentality is still there.

For example, it is important to be in the media.  We are often in the papers, on the radio, and on the television, but I know from my experience that if we have not appeared on television in six months, the next time we are on, I will hear “Oh, Stella Maris?  I’ve never heard about it!” With so much news these days, what happened yesterday is already forgotten. And the organizations are the people in them – some are retiring, some are leaving, and new people are coming on continuously.  So the fight is every day.

Kevin:  You have worked with port welfare committees for a long time in your ports, but many are less lucky.  What advice would give people trying to start a new one?

Mary: I think one mistake we – the AOS and the MTS – made in the beginning, because we were so excited to start one, was trying to lead and organize it all by ourselves.  That made it difficult to keep the port authority and the rest of them interested. But we kept going and had some success, and about ten years from the beginning we began to look for other chairpeople.

At the moment our chair is a retired port authority person, and, of course, when he sends out the minutes, they all turn up at the meeting.  It’s absolutely fabulous, because then we chaplains can sit back a little bit and be part of it rather than being in the front and trying to make sure it happened like in the last ten years.  Now it could even happen without us! I can’t believe it, and I thank God every time I hear these terminal people talking about seafarers’ welfare. You have to be detached from thinking “it’s my little thing, and only I can take care of it.”  I suppose that comes with age – you don’t feel threatened by anyone. But I think one way or the other you need to start it. It won’t be perfect in the beginning, or ever maybe, but it is worth the effort.

Kevin: How do you think seafarers’ ministry should develop in the future?

Ricardo:  The biggest thing is that we need to be able to change with the times.  20 years ago, we did not know what a SIM card was, now we are talking about covering the Port of Barcelona in free wifi.  We promote this, even though some of us worry that it means the seafarers will not need us. I tell them that there would still be a need.  Now we have discovered a new need, and you will laugh when you hear it: we are now bringing parcels from Amazon to the ships, because crews are asking us “I’ve bought something, can I please give them your address?”  And tomorrow there will be other needs. The most important thing is that we are always there for seafarers to give them a welcome, and when we are there we will see what the needs are.
Kevin: Any parting words for your colleagues here at the conference or reading this at a distance?

Mary: I would like to wish all groups well, and all seafarers well, because seafarers can actually teach us what to do.   So my wish for all of us is that we be free to hear that message. 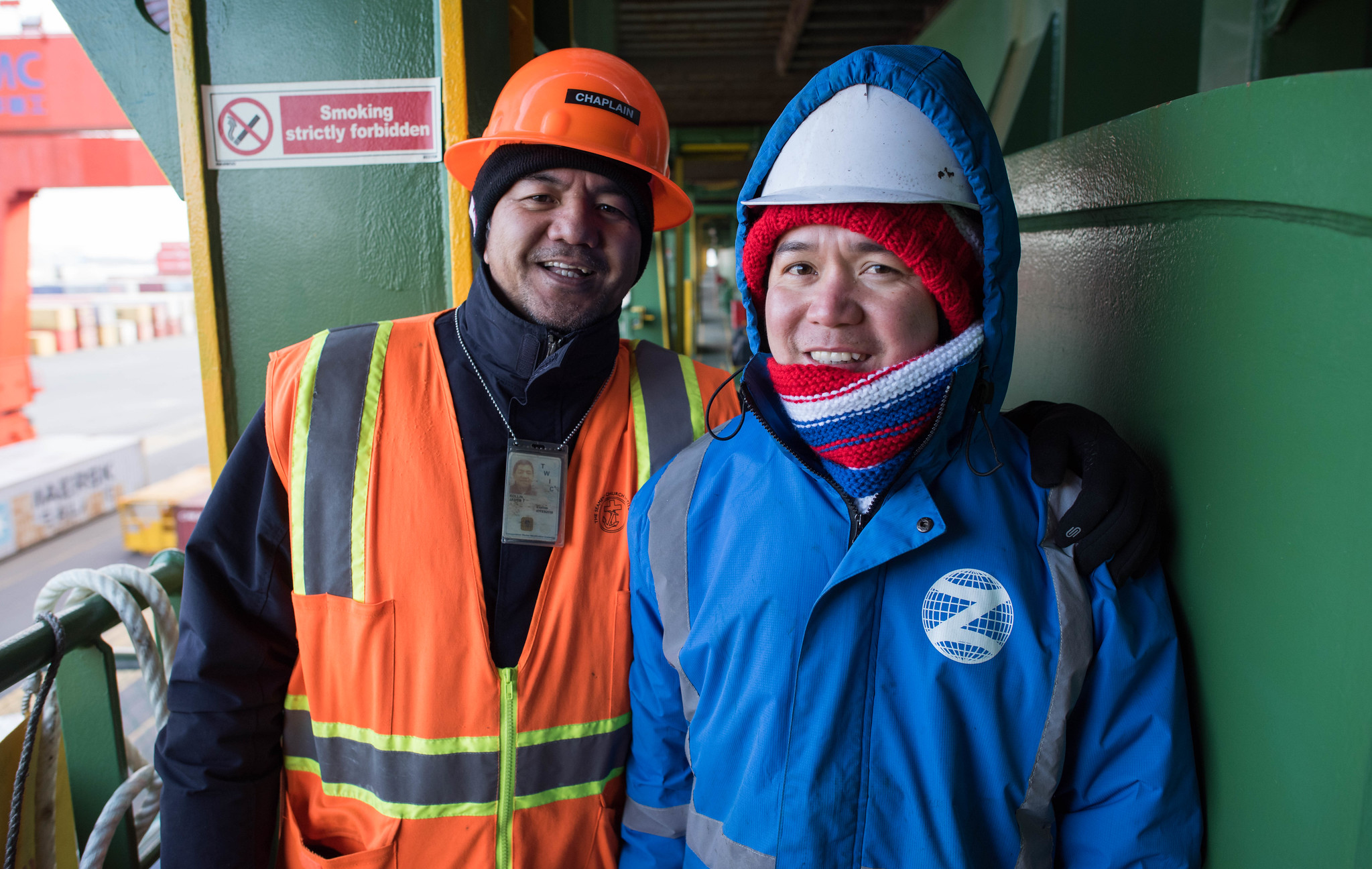 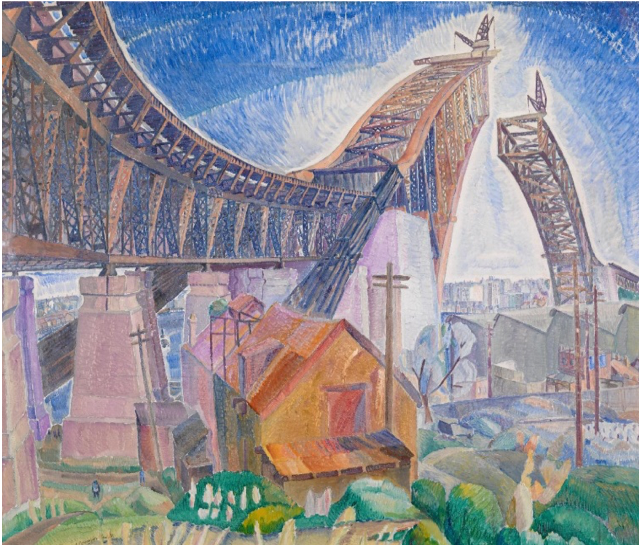