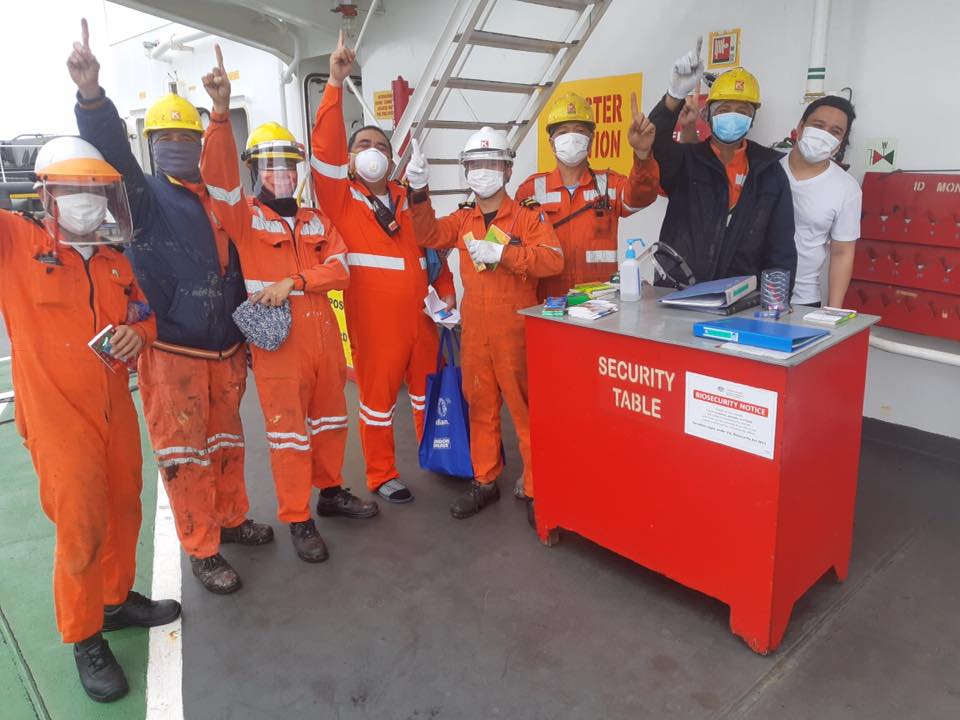 The Lighthouse Harbour Ministries in the port of Vancouver, British Columbia sees itself as the evangelical outcome of God’s work among committed communities with an eternal purpose. This mission understands its mandate: to love and honor God by serving the seafarers of the world in word and deed.

Incorporated in 1981, the outreach has followed closely the vision of Chaplain Emeritus Teus Kappers who was first invited to care for seafarers during his late teen years.

As a young student at the Bible College of Wales in 1972, Kappers, was approached by London City Mission to work at the seamen ministry in Tilbury, England.  He undertook the work passionately unaware he was preparing for his next opportunity.

During this time, committed Christians and church leaders across the globe in British Columbia, Canada, were becoming aware through random outreach to seafarers in their local port, that a center would benefit a mission to seafarers in Vancouver. Through various interactions, the concerned found comradery and invited Kappers and his wife, Maria, to consider leading the mission they envisioned. With much prayer, the couple ultimately decided to relocate their young family in 1982 along with thousands of books and Bibles from Open Doors mission of the Netherlands to Vancouver to establish a new mission which continues today.

As the concern for seafarers grew, prayer seemed the bedrock of the development resulting in leadership and funding from various and unexpected sources including a small church that was closing which donated $75,000 to the mission during its early years. These opportunities confirmed those involved that God was invested in their project.

Lighthouse Harbour Ministry has grown to include five staff members/chaplains and over 100 dedicated volunteers who provide hands-on service from visiting ships to knitting caps or baking.

A second seafarers’ center was established in 1996 to serve the Faser Surrey Docks, a port located south of the greater Vancouver area. The port is the largest modern, marine terminal on the North American west coast.

In an initial meeting between Chaplain Kappers and the CEO of the Fraser River Port Authority, Kappers presented his vision. The port agreed to sell the mission three trailers and provide a piece of land to lease for one dollar per year. The remodeled trailers became an attractive building for seafarers to rest and recreate.

In addition, the organization has helped develop three other missions: at the port of Nanaimo on Vancouver Island, where no physical center exists but ship visiting and literature distribution is offered; at Port of Prince Rupert, where the ministry is led by Pastor Zito, a Filipino and full-time chaplain since 2013. Here, an active group of volunteers man a center in town; and in Victoria which serves cruise ships from May to September.

Initially in Victoria, the Kappers worked from the back of their van contacting the crews, building relationships and giving the Jesus DVD in 32 languages. In 2012, the port authority permitted the mission a fitting location. A large tent next to the cruise terminal became the destination for cruise ship workers.  The Lighthouse team developed leadership and volunteers with unique cross-cultural backgrounds, like a retired South African Navy officer, who accepted the role of full time chaplain. Workers commit to months of training as they greeted thousands of seafarers who come to the Lighthouse tent.

Each of the three groups have since launched as thriving independent ministries.

“It is close to what the Apostle Paul did in Asia,” said Lighthouse office manager, Paul Ratsoy.  “He began a ministry, trained locals, but left the churches in the hands of other overseers.”

The conservative evangelical outreach places a high priority on the spiritual care of seafarers believing personal contact and conversation are best. When able to meet with crew members individually, ship visitors try to understand the seafarer’s individual needs and challenges. They offer spiritual care from a non-denominational point of view and physical care as a response to their honor of God.

“Most seafarers’ physical needs are met. Our first priority is their spiritual need. Eternal life is our greatest concern,” said Ratsoy.  “God has given us a great amount of gentleness and respect. We react to unbelievers as Jesus did. He never forced himself. When we tell seafarers of Christ and they are not interested, we respect their decisions.”

If seafarers express other needs, we do our best to meet them as well. If a seafarer has a legal or contractual need, we refer them to the local ITF representative for assistance.”

Harold Hanna had visited ships in Vancouver as an independent evangelical for 50 years prior the formal development of a mission. In 2005, his son, Ray, joined the ministry board and began volunteering one night a month. He has since become the senior chaplain.

The Lighthouse chaplains, ship visitors and volunteers seek to answer life questions with Biblical principles. Bibles are offered in over 30 languages to those who request it. Aware of the unique lifestyle working and living at sea involves, fellowship is important when seafarers come to a port according to Hanna.

“The greatest need for seafarers is hope,” said the senior chaplain. “Many seafarers have extended contracts. Many have been disappointed repeatedly. They need hope.”

The multi-cultural crews contend with difficult working conditions from dangerous weather to piracy. More deeply rooted and a less identifiable liability is the loneliness and isolation which accompanies this profession. Hanna contends that finding balance with internet use is also a challenge for seafarers.

Following the recent restrictions of the COVID pandemic, Hanna is excited to see their free shuttle service resume. Centers are opening again as part of controlled shore leave set by Transport Canada. Safety protocols are being implemented so seafarers are again able to visit the seafarer center where there are refreshments, games, literature, personal contact and a small store. In addition, a brief devotional time is offered each evening.

“Whatsapp is a very good way to continue to building a relationship and encourage those at sea in times of trouble,” said Hanna.

The cross-section of mission volunteers, originating from various countries, intersects well with the multi-national crew members on ships. Faces light-up when seafarers meet someone they have things in common with.  Lighthouse Harbour Ministry highlights the greatest commonality as they see it – the human soul.

“Our motto has been ‘Lord, when we stop sharing the Gospel and become just humanitarian shut us down.’ It is a combination of both,” said Hanna. 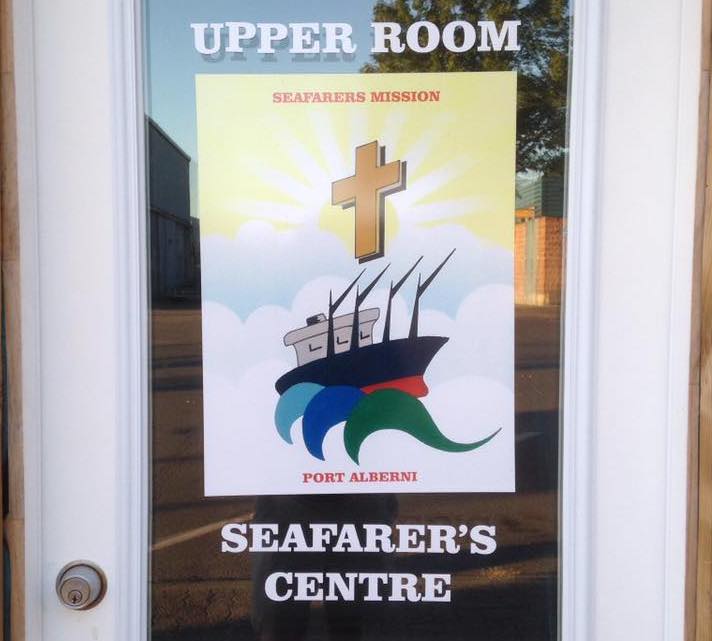 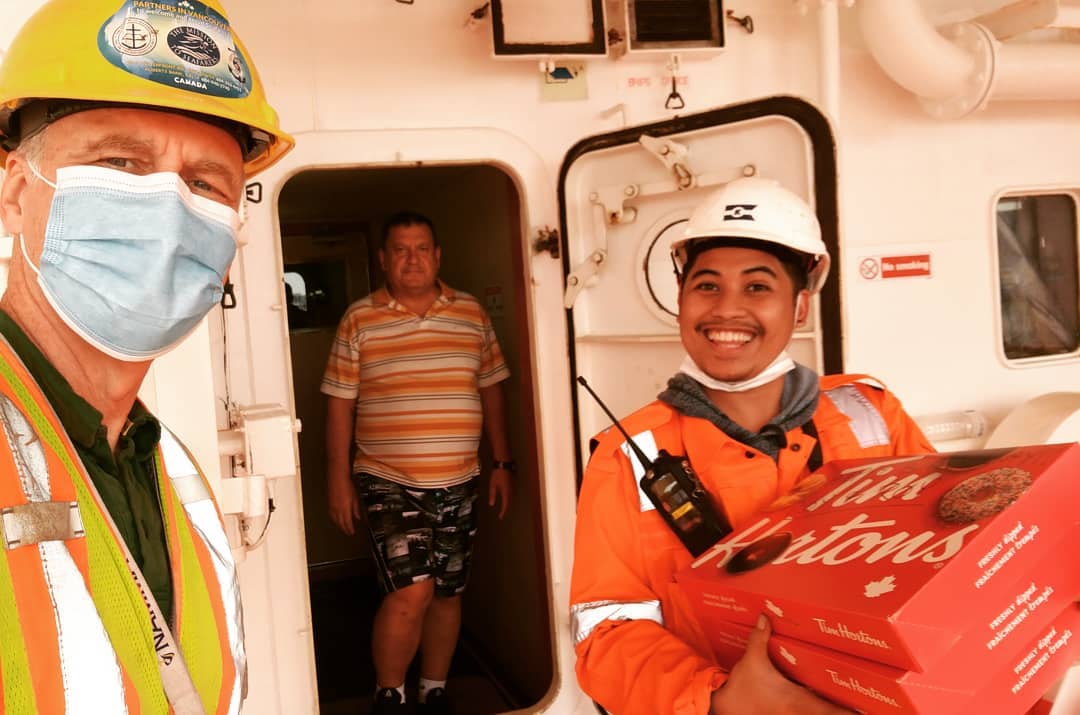 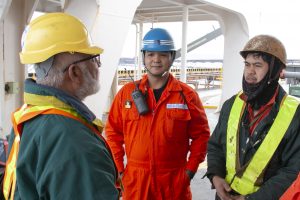 Stella Maris Vancouver: Practical and Pastoral Care for the People of the Sea