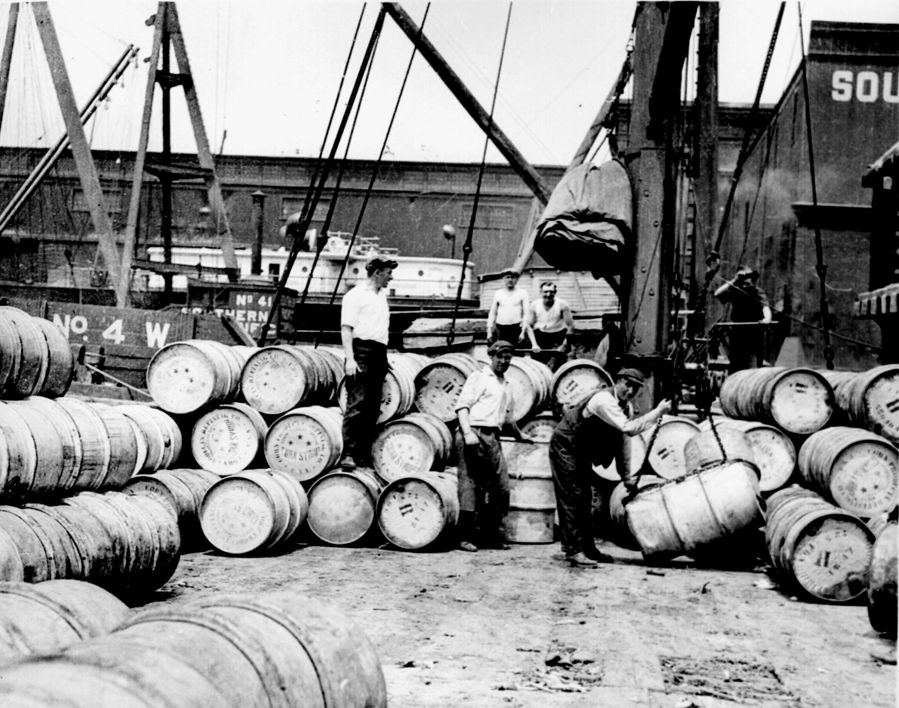 (Image: Longshoremen on a New York dock loading barrels of corn syrup onto a barge on the Hudson. Photograph by Lewis Hine. c. 1912 [Public Domain])

Rose George the British author of Ninety Per Cent of Everything (Henry Holt, 2013) describes the business of shipping as the system that delivers food on your plate, clothes on your back and gas in your car. Seafarers manage and guide the ships from port to port but for the most part when ships are in port the task of loading and unloading cargo rests with a shore-based workforce. There are some exceptions where specialized ships are capable of self-unloading, but even in these cases the ship has to liaise with a shore terminal. Tankers are the most predominant self-unloading type of ship because they use shipboard pumps to send their cargo into the pipelines that flow into the shoreside tanks. However, even though the ship is controlling the flow the refinery or tank farm will dictate the rate at which they can receive. In the case of loading even tankers and self-unloading bulk carriers rely on the shore terminal to provide the business of loading cargo.

Since the days of wooden ships driven by sail, the cargo carried by ships has required the skills of stowage and the art of stevedoring to fit cargo safely and efficiently inside the compartments of a ship. This work began as a physically challenging task of manual labor with cargo being carried onboard or passed across the ships rail. This process was improved by the use of rigging a derrick with lifting tackle, this allowed for heavier lifts and faster work. However, the early iterations still required manual winching of the tackle to raise and lower the hook.

The demands of world trade required more shipping capacity, this gave rise to steel-hulled cargo ships in the early 19th century still powered by sail and the fast clipper ships that plied the ocean routes into the early 20th century. The four-masted steel barque Moshulu now in service as a restaurant at Penn’s Landing in Philadelphia represents a perfect example of the cargo ship of one hundred years past. 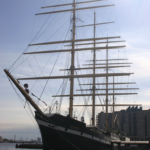 The Moshulu could carry 5,300 tons of cargo. This repreasents a miniscule volume compared to the 12,000 teu capacity container ships that frequent our modern container terminals in 2019 with a deadweight capacity twenty-five times greater than the Moshulu.

The relationship between seafarers and the small army of people that load and unload the ship has always been a symbiotic arrangement, the business of stowage while performed by the stevedores is performed at the direction of the ship’s deck officers. Stevedore managers are often former seafarers who left the sea for a shoreside job. Seafarers interact with the stevedores as they come onboard and when hatches need to be opened or cargo lights are needed for night work. The relationship between seafarers and stevedores is universal because it works in every port in every nation.

The system of handling cargo has changed dramatically with the introduction of mechanized handling systems that have reduced the need for the physical labor which was predominant until about the past fifty years. Today the movement of “general cargo” the term given to all manner of goods is the domain of the shipping container and its unit of measure the “teu.” Teu refers to a twenty-foot equivalent unit and the original “teu” was a steel container measuring 8 feet high by 8 feet in width with a length of 20 feet. The history of the shipping container leads back to unitization systems that began with the railroads who recognized that it was more efficient to move cargo inside a unitized container. In the early 1950’s the US Army created their CONEX box system, a system of unitized loads that enabled military supplies to be moved efficiently. Malcom Maclean is the Patriarch of today’s container revolution. In 1955, Maclean the owner of a US trucking company worked together with design engineer Keith Tantlinger to create a rectangular shipping container with twistlock fittings at each corner. The twistlocks allowed the containers to be easily lifted and secured – they remain the keystone of every facet of the global 21st century container handling system. Maclean’s first containers were only 10 feet in length. Maclean’s initial interest in shipping was to create ships capable of transporting his truck semi-trailers up and down the US Atlantic coast corridor. However, Maclean realized that if he could separate the box from the chassis of the trailer this would be far more efficient, the invention of the twistlock to make a simple connection between box and chassis also provided a simple system for lifting and securing. To further his dream in 1956, Maclean acquired two World War 11 T-2 tankers and he converted them to carry his intermodal containers on deck. The first voyage took place in April 1956 with the SS Ideal-X which sailed from Port Newark to Houston carrying 58 of Maclean’s intermodal containers. In April 1960, Maclean’s shipping company became Sea-Land and went on to become one of the great leviathans of the global container industry. Maclean’s gift to the world was making his patents for standardized container design available at no cost to the International Organization for Standardization known simply as ISO. In so doing, Maclean enabled a super-efficient system of intermodal transport that is now embraced by the railroads with double-stack container trains weaving across the western US and trains connecting China and Europe under the Chinese Belt and Road network. The system of unitized container that began with the railroads has now come full circle.

Maclean’s intermodal revolution began 65 years ago and life on the docks around the world changed forever. Prior to the ISO container, all cargo was shipped either loose in boxes or crates or made up into unit loads on pallets. The task of loading and unloading the individual boxes and crates and pallets was the work of stevedores, longshoremen and dockers. The word stevedore originated in Portugal as the word “estivador” meaning a man who loads ships and stows cargo. In the United Kingdom the word for the work of stevedores was “dockers.” In the United States and Canada, the word for a stevedore was “longshoreman.” In the 21st century the role of the stevedore, docker and longshoreman remains, however, today the size of the workforce is greatly diminished, and the physical labor has been largely replaced by mechanized handling methods. By some estimates employment in the ports dropped by 90% following the intermodal revolution. In the 1970’s redundancy threatened all of the port workers as the use of Maclean’s ISO containers expanded rapidly. The cost of handling cargo reduced dramatically due to a dramatic reduction in the need for large gangs of labor, in addition the efficiency increased making time in port less and reducing the time to market. Further savings came from reductions in damage and loss since the cargo was now sealed inside the ISO container from shipper to receiver.

In 1969, I joined a British general cargo ship in Brooklyn, New York. The London Statesman was under charter to the American shipping company States Marine Lines and employed in their US to Far East liner service. Each round trip from New York lasted five and a half months and no ISO containers were carried, every piece of cargo was loaded and discharged by multiple gangs of stevedores or longshoreman. The design of the docks in Brooklyn was similar to many US ports, the dock warehouse was sited close to the edge of the wharf and had two levels for receiving cargo. The outboard ships derrick was swung out to enable the cargo net to land at either the lower or upper level of the warehouse. Cargo in the net was then manhandled on to hand trucks and moved into the warehouse. [In later years, a wooden pallet would be used so that a small forklift could replace the use of hand trucks.] Onboard ship we could work up to nine gangs of longshoreman, each gang consisting of the ten men in the hold of the ship plus the two winchmen and hatch tender, four men on the dock and a foreman, eighteen in total. Every morning at 8 am, as many as 120 burly longshoremen made their way up the ships gangway to take up position in our holds and on deck. At midday they left for lunch and returned at 1 pm for the afternoon shift. This small army took over the ship every day, in the summer of 1969, we spent three weeks alongside in Brooklyn, there was no night or weekend work due to the high cost of overtime for the longshoremen. The bulk of our 15,000 tons of cargo was consumer products, each cardboard box carried the description of contents, we carried transistor radios, 8-track players, all manner of consumer goods from Christmas decorations to plastic flowers and clothing. This was the supply line that fed the main street stores of the time; Sears Roebuck and Woolworths – the forerunners of today’s Walmart and Costco.

Labor supply in ports is predominantly represented by trade unions with the pay, terms and conditions negotiated under master agreements with the shipping lines and stevedoring companies. The use of the word stevedore can therefore have different interpretation because the word stevedore is used as when referring to the name of the company that has been contracted to perform the service and when referring to the work of the labor gangs actually performing the work. 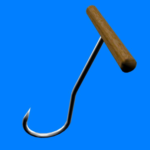 Employment in the ports has always fluctuated and as a result the demand for labor can ebb and flow as the number of ships in port rises and falls. For this reason, the labor supply is managed from a labor pool or hiring hall. Longshoremen and dockers are paid only on the days when they work, they are not on a salary system, (although some labor agreements contained guaranteed annual income protection.) To cope with surges in labor demand the union members are the first to receive work from the labor pool and once they are fully employed, the workforce can be supplemented by the use of “casuals,” workers who are outside the union membership. The method of hiring varies but as a general rule those with the lower hours to date are called first, so that there is a fairness of earning capability. Some ports used the parent gang system where each stevedoring company sponsored a number of gangs known by the name of each foreman. The company had first call on their sponsored gangs ensuring that they had continuity of skill for their particular operation. If that company needed more gangs, they could pull from the other available gangs not called out. Other ports use an hours-worked dispatch system and gangs are made up from the hiring hall on an ad-hoc basis. When I worked in the port of Long Beach, California, at the start of a ship unloading the first shift was always a challenge because the individuals making up each gang had to assemble and get to know each other as they formed into a gang to work the ship. Something that the parent gang system did not require. In my own experience having worked with both systems the parent gang system was safer because the members of the gang always worked together just like seafarers do onboard a ship.

In our ports today, we have a much smaller workforce than the pre-Maclean intermodal revolution days of the 1950’s. The radical change has been the capital investment and quantum of mechanical handling equipment that now operates in the ports from the post-panamax gantry and mobile harbor cranes to reach stackers and high capacity fork-lift trucks. In the port of 21st century the stevedores, dockers and longshoremen have traded in their cargo hook for a seat in a multi-million-dollar machine. 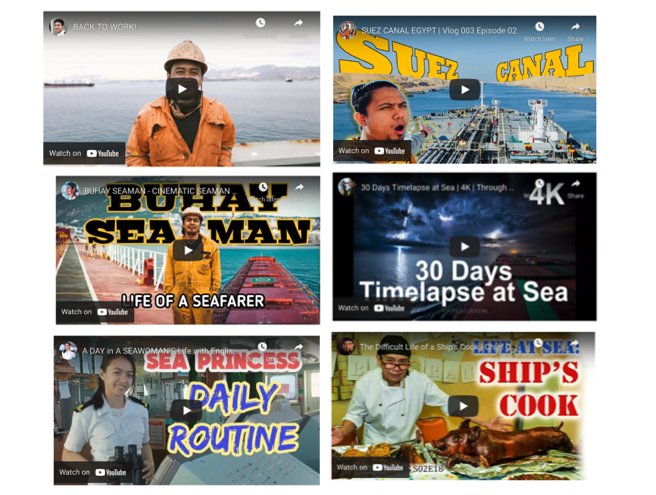